On Thursday 9 November Lincolnshire company OrderWise was crowned Midlands Family Business of the Year 2017, in the region’s biggest and only awards showcase for family owned and run firms. 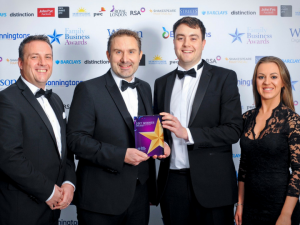 The company was announced winner of the Midlands Family Business Awards’ headline award on Thursday 9th November at a glittering black-tie ceremony at The Velodrome, Derby Arena, attended by 300 guests including all this year’s finalists across the Awards’ ten categories, their sponsors, supporters, and independent judges.

Founded in 1991 by MD David Hallam, OrderWise is one of the UK and Ireland’s leading suppliers of dedicated stock management software for business. With over 175 staff operating from its Saxilby head office, they work with organisations operating in a host of industry sectors, from manufacturing, distribution and retail, to healthcare, pharmaceuticals, food and drink.

Scooping the Best Small Family Business Award, for businesses with an annual turnover of up to £5 million, was Quadzilla Quads. Also based in Lincolnshire, they are the UK’s largest importer of road legal and off-road Quads.

Northamptonshire manufacturer and online retailer of laundry, textile care, hygiene and cleaning products Ideal Manufacturing was a double winner on the night, winning the Manufacturing Excellence and the Best Use of Digital Awards. 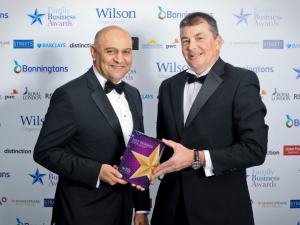 Individuals recognised in this year’s Awards are Steve Lloyd of Derbyshire Wholesale catering supplies distributor Magenta (UK) Ltd, who was named the Midlands’ Director of the Year, and founder of Lincolnshire’s Mtag Composites Nick Maltby, the Entrepreneur of the Year whose award was sponsored by Morningside Pharmaceuticals and presented by the Chief Executive Officer, Dr Nik Kotecha OBE.

“This is the eighth year for the Awards and once again, the Awards team, our panel of judges and each of our sponsors has been bowled over by the exceptional quality, pedigree, innovation and performance of each and every one of the finalists. As the regions only independent initiative to recognise and showcase the work and achievements of family businesses, yet again all the winners and finalists prove the vitality of the Midlands’ family business sector and its significant contribution to the region’s economy.” 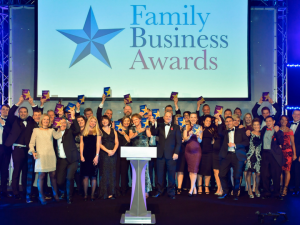 For the full list of winners and highly commended please visit www.familybusinessawards.co.uk

How to run a professional services client listening programme

How can business awards benefit your company?