Alltruck plc has celebrated its 2019 Annual Awards Night, bringing together its colleagues, customers and suppliers to celebrate all of the successes of the year. 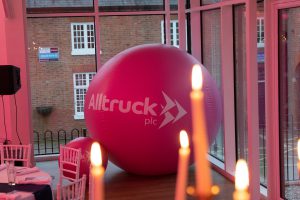 Alltruck plc, a leading contract hire and truck rental company, holds an awards night each year to join together all employees from across its Leicestershire head office and Loughborough depots, as well as its customers and suppliers.

The focus of the 2019 awards was ‘Alltruck at its best,’ showcasing the talent, teamwork and commitment of Alltruck’s people and those that the company works with.

V Formation’s Sue Carr has worked with Alltruck for the past two and a half years as its Marketing Director, and helped to develop the idea of the ‘Alltruck journey,’ which involved the creation of a strong brand identity – including its now famous pink ball.

Sue supported the organisation of the 2019 awards night, alongside V Formation’s Marketing Executive Amy Cooper who produced marketing collateral for the event. 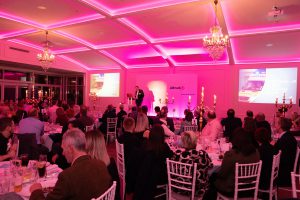 The awards returned to luxury hotel, Winstanley House in Leicester, which was illuminated by Alltruck’s classic shade of pink.

Giving a guest speech on the night was Mark Fritz, an internationally recognised speaker who gives talks across the globe on leadership and the power of ownership. 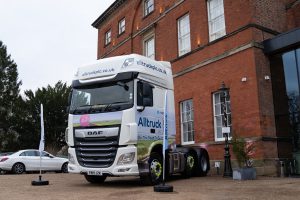 The 2019 awards were a great success and honoured the heroes of Alltruck at all levels, who have clearly demonstrated the Alltruck values and the foundations it is built on, in being committed, progressive, passionate and proactive.